Categories In New Sales Wales 3 Likes
The Sydney Opera House is a multi-venue performing arts centre in Sydney, New South Wales, Australia. Situated on Bennelong Point in Sydney Harbour, close to the Sydney Harbour Bridge, the facility is adjacent to the Sydney central business district and the Royal Botanic Gardens, between Sydney and Farm Coves. Designed by Danish architect Jørn Utzon, the facility formally opened on 20 October 1973 after a gestation beginning with Utzon’s 1957 selection as winner of an international design competition. The Government of New South Wales, led by the premier, Joseph Cahill, authorised work to begin in 1958 with Utzon directing construction. The government’s decision to build Utzon’s design is often overshadowed by circumstances that followed, including cost and scheduling overruns as well as the architect’s ultimate resignation.
The Sydney Harbour Bridge is a steel through arch bridge across Sydney Harbour that carries rail, vehicular, bicycle, and pedestrian traffic between the Sydney central business district (CBD) and the North Shore. The dramatic view of the bridge, the harbour, and the nearby Sydney Opera House is an iconic image of Sydney, and Australia. The bridge is nicknamed “The Coathanger” because of its arch-based design or is simply called “the Bridge” by Sydney residents. Under the direction of Dr J.J.C. Bradfield of the NSW Department of Public Works, the bridge was designed and built by British firm Dorman Long and Co Ltd of Middlesbrough and opened in 1932. The bridge’s design was influenced by the Hell Gate Bridge in New York City. It is the sixth longest spanning-arch bridge in the world and the tallest steel arch bridge, measuring 134 m (440 ft) from top to water level. It was also the world’s widest long-span bridge, at 48.8 m (160 ft) wide, until construction of the new Port Mann Bridge in Vancouver was completed in 2012.
The Rocks is an urban locality, tourist precinct and historic area of Sydney’s city centre, in the state of New South Wales, Australia. It is located on the southern shore of Sydney Harbour, immediately north-west of the Sydney central business district. The precinct and its immediate surroundings are administered independently of the local government area of the City of Sydney, by a New South Wales state government statutory authority, the Sydney Harbour Foreshore Authority. The Rocks area borders on the Bradfield Highway, leading to the Sydney Harbour Bridge, with the localities of Dawes Point and Millers Point, to the west. It is immediately adjacent to Circular Quay on Sydney Cove, the site of Australia’s first European settlement in 1788.
The Museum of Contemporary Art (abbreviated MCA) in Sydney, Australia is an Australian museum solely dedicated to exhibiting, interpreting and collecting contemporary art, both from across Australia and around the world. It is housed in the Art Deco-style former Maritime Services Board Building on the western edge of Circular Quay. This area was the traditional lands of the Gadigal people of the Eora nation. The museum was opened in 1991 and from 2010 underwent a $58 million expansion and redevelopment, fully reopening as the Museum of Contemporary Art Australia on 29 March 2012. 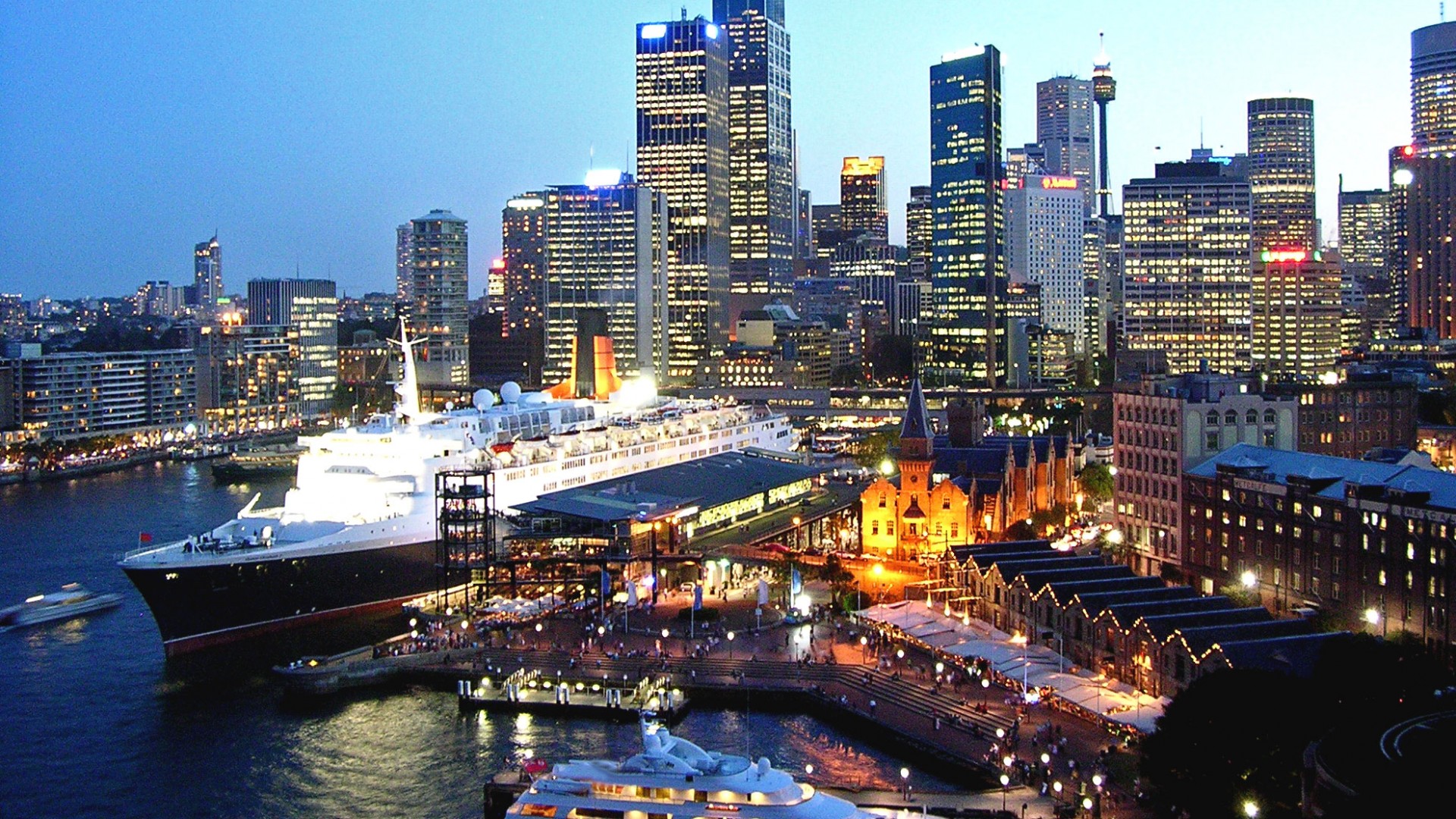 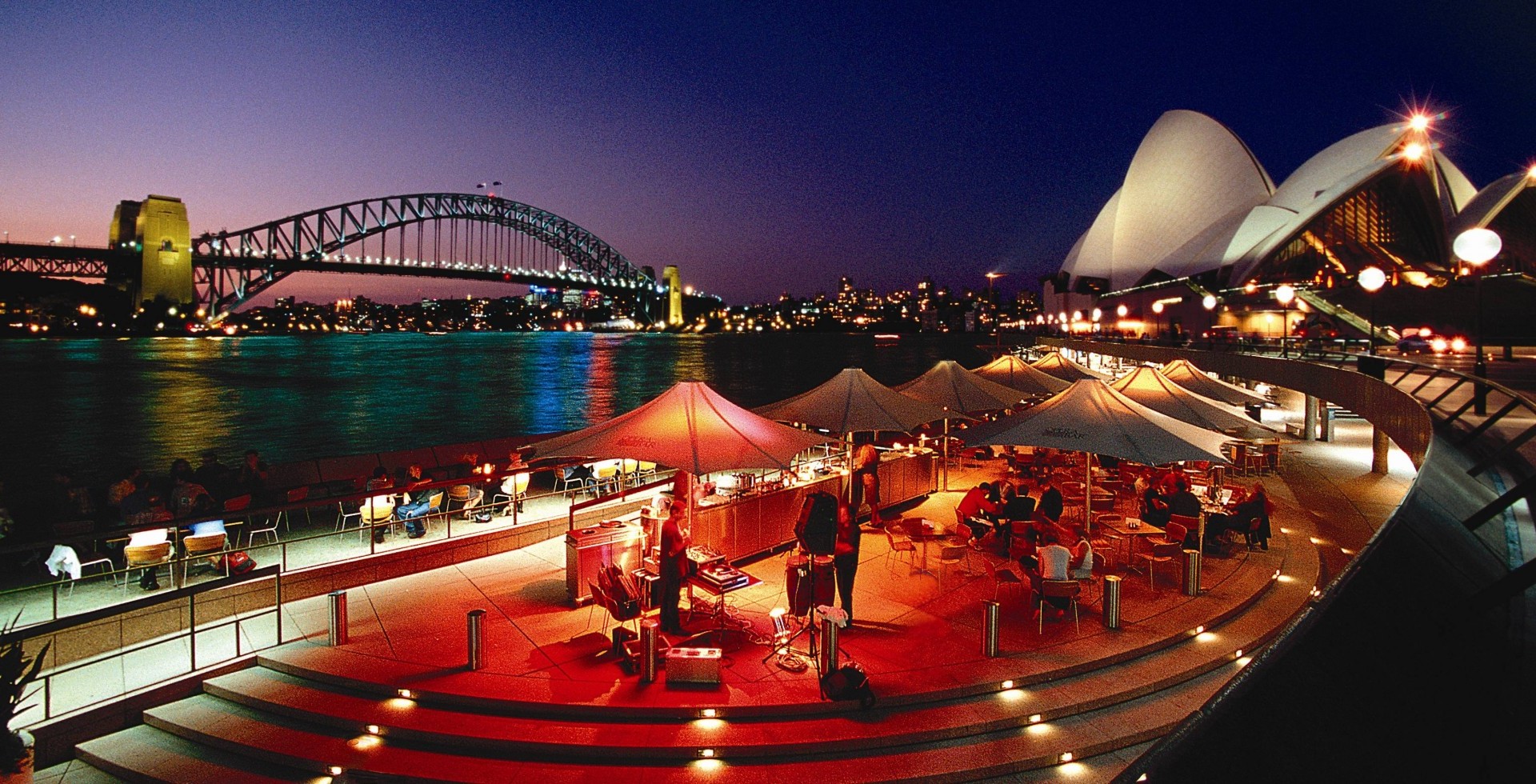 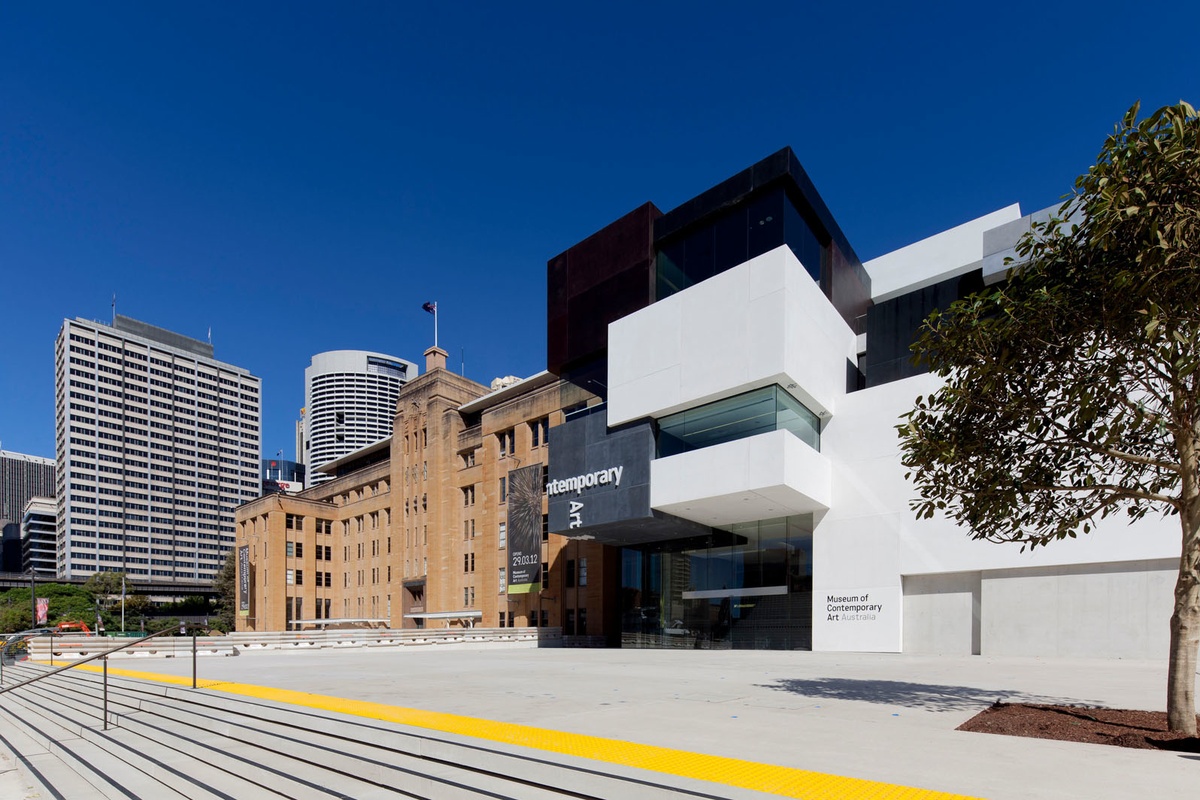 The Queen Victoria Building (or QVB), is a late nineteenth-century building designed by the architect George McRae in the central business district of Sydney, Australia. The Romanesque Revival building was constructed between 1893 and 1898 and is 30 metres (98 ft) wide by 190 metres (620 ft) long. The building fills a city block bounded by George, Market, York and Druitt Streets. Designed as a marketplace, it was used for a variety of other purposes, underwent remodelling and suffered decay until its restoration and return to its original use in the late twentieth century.
Sydney Tower is Sydney’s tallest structure, it is also the second tallest observation tower in the Southern Hemisphere, after Auckland’s Sky Tower, though Sydney Tower Eye’s main observation deck is almost 50 m (164 ft) higher than that of Auckland’s Sky Tower. The name Sydney Tower has become common in daily usage, however the tower is also known as the Sydney Tower Eye, AMP Tower, Westfield Centrepoint Tower, Centrepoint Tower or just Centrepoint. The Sydney Tower is a member of the World Federation of Great Towers. The tower stands 309 m (1,014 ft) above the Sydney central business district (CBD), located on Market Street, between Pitt and Castlereagh Streets. It is accessible from the Pitt Street Mall, and sits upon the newly refurbished Westfield Sydney (formerly centrepoint arcade). The tower is open to the public, and is one of the most prominent tourist attractions in the city, being visible from a number of vantage points throughout town and from adjoining suburbs. While the shopping centre at the base of the tower is run by the Westfield Group, the tower itself is occupied by Trippas White Group, which owns and operates Sydney Tower Dining, and Merlin Entertainments, which owns and operates the Sydney Tower Eye and Oztrek.
Paddington is an inner-city, eastern suburb of Sydney, in the state of New South Wales, Australia. Located 3 kilometres east of the Sydney central business district, Paddington lies across two local government areas. The portion south of Oxford Street lies within the City of Sydney, while the portion north of Oxford Street lies within the Municipality of Woollahra. It is often colloquially referred to as “Paddo”. Paddington is bordered to the west by Darlinghurst, to the east by Centennial Park and Woollahra, to the north by Edgecliff and Rushcutters Bay and to the south by Moore Park.
The Royal Botanic Gardens is a major botanical garden located in the heart of Sydney, Australia. Opened in 1816, the garden is the oldest scientific institution in Australia and one of the most important historic botanical institutions in the world. It is open every day of the year and access is free. Its stunning position on Sydney Harbour and immediately adjacent to the Sydney CBD, the Sydney Opera House and the large public parklands of The Domain ensure it is one of the most visited attraction in Sydney. 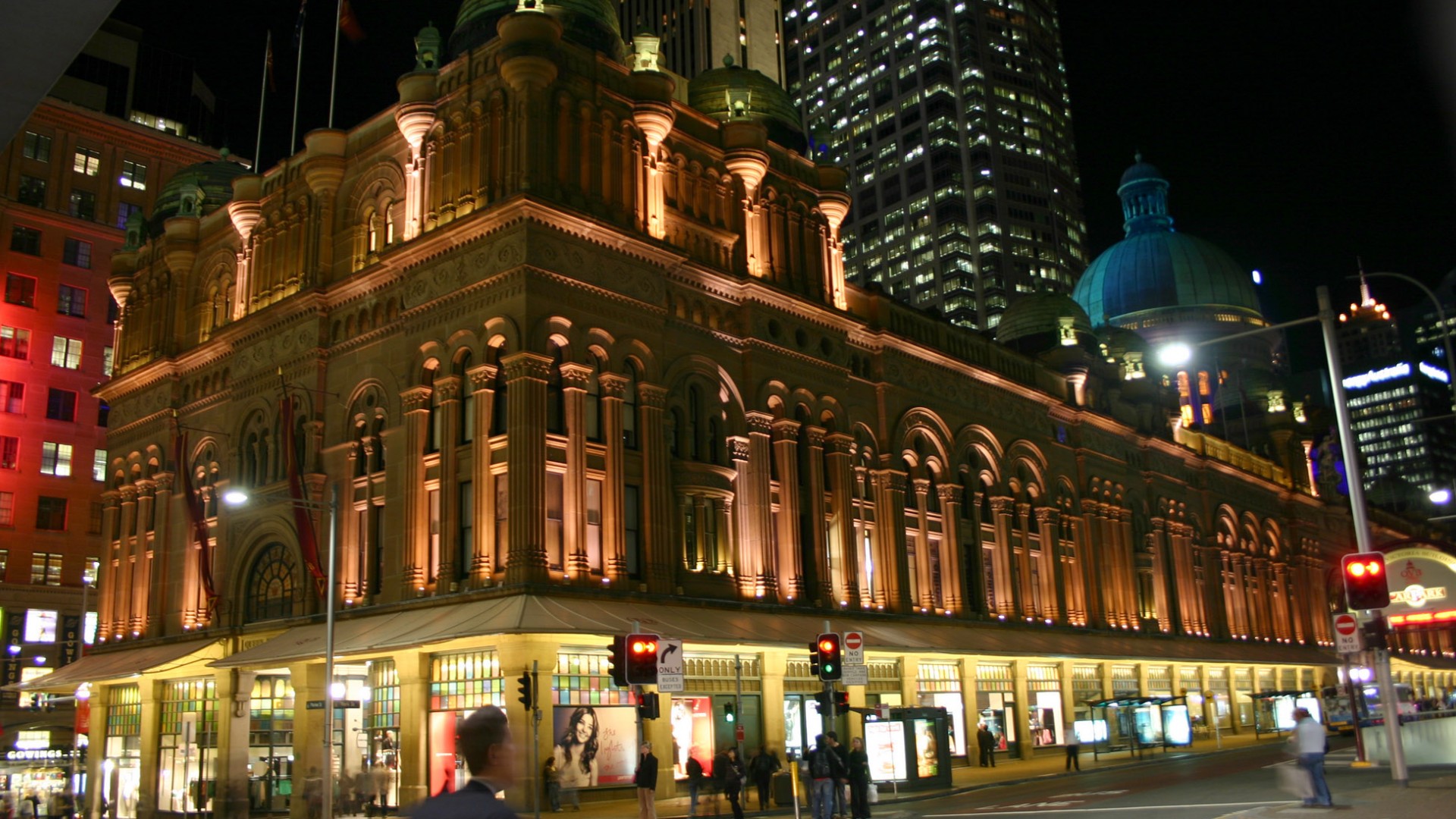 Darling Harbour is a harbour adjacent to the city centre of Sydney, New South Wales, Australia. It is also a large recreational and pedestrian precinct that is situated on western outskirts of the Sydney central business district. The locality extends northwards from Chinatown, along both sides of Cockle Bay to Darling Harbour wharf on the east, and to the suburb of Pyrmont on the west. Cockle Bay is just one of the waterways that makes up Darling Harbour, which opens north into the much larger Port Jackson. The precinct and its immediate surroundings are administered independently of the local government area of the City of Sydney, by a New South Wales state government statutory authority, the Sydney Harbour Foreshore Authority.
The Sydney Fish Market is a commercial enterprise in Sydney, New South Wales, Australia. Sydney Fish Market is located on Blackwattle Bay, in the Inner West suburb of Pyrmont. It is 2 kilometres west of the Sydney central business district, in the local government area of the City of Sydney. Sydney Fish Market was established in 1945 by the state government and was privatized in 1994. It is the world’s third largest fish market. Sydney Fish Market incorporates a working fishing port, wholesale fish market, fresh seafood retail market, a delicatessen, a sushi bar, a bakery, a gift shop, a fruit and vegetable market,a florist, a beverage outlet, a seafood cooking school, indoor seating and an outdoor promenade for visitors. There are daily wholesale auctions for Sydney’s seafood retailers.
Sea Life Sydney Aquarium (formerly Sydney Aquarium) is a public aquarium located in the city of Sydney, New South Wales, Australia. It is located on the eastern (city) side of Darling Harbour to the north of the Pyrmont Bridge. It is a full institutional member of the Zoo and Aquarium Association (ZAA) and the World Association of Zoos and Aquariums (WAZA). The aquarium contains a large variety of Australian aquatic life, displaying more than 700 species comprising more than 13,000 individual fish and other sea and water creatures from most of Australia’s water habitats. Additionally, the aquarium features 14 themed zones including a Bay of Rays, Discovery Rockpool, Shark Walk, and the world’s largest Great Barrier Reef display. Along the way, visitors encounter animals unique to each habitat, including two of only six dugongs on display in the world, sharks, stingrays, turtles, platypuses, penguins and tropical fish, among others.
Bondi Beach or Bondi Bay (/ˈbɒndaɪ/ bon-dye) is a popular beach and the name of the surrounding suburb in Sydney, New South Wales, Australia. Bondi Beach is located 7 km (4 mi) east of the Sydney central business district, in the local government area of Waverley Council, in the Eastern Suburbs. Bondi, North Bondi and Bondi
Get social with Me
Share with others